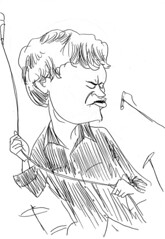 Bob Pollard
Originally uploaded by preachertom
Sometimes I draw quick caricatures during my lunch break and then I put them up here: http://www.flickr.com/photos/preachertom/sets/72157622425992107/ 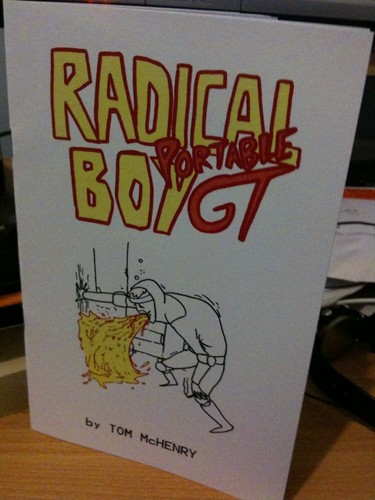 I know it's been a while, it's been kind of a weird, private time for me creatively, but I wanted to let you know I've actually held a for-real physical copy of Radical Boy Portable GT in my hands.

You can purchase one for yourself at the Small Press Expo this weekend in Bethesda, Md!

I'll make copies available for sale online after we get back (to drive up demand, you know).

Perhaps I'll post some things I've drawn lately, but none of it's been comics. I am, however, all caught up on Lost now. 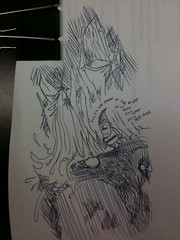 Dwarf Sings Queen of the Night
Originally uploaded by preachertom
So I was working on a pretty good idea for a book, I thought. Then I took about a week and a half off and now I don't know what I'm doing.

Anyway, I drew this today at lunch on my giant scrap paper pad. It's a dwarf singing Whitney Houston's "Queen of the Night."

Maybe I can salvage the new book after all. Just totally change it, sort of. I was sick for over a week with ridiculous bronchitis and it feels like I'm back in that too-comfortable groove of "Well, I guess it's time to put everything back together again."

The odometer ticks over another year. No posting anything today, just drawing and being rained on.

I've been so, so hungry lately for some reason or another.

I gently increased the size of my intervals today just to see what might happen. I felt no knee pain at the end of my half hour, but I'm hardly enjoying my runs. Mostly I spend all my head space overanalyzing the sensations traveling up my right leg each time it hits the ground so I can stop at the first glimmer of pain. It'll probably be a couple weeks after the knee stuff is all healthy for my mind to get itself right.

Meanwhile, I've been drawing. Lately it's been a lot more like making myself draw, so I've been falling back on running and tinkering with the new computer bits for hobbies of enjoyment. Probably my sketchbook pages are just overwhelmed by random lines. A lot of little renderings of fabric folds or wrinkles peppered by half-hearted figure drawings that come more from the head than the eye or the heart. I really wanted to be about a month in to a new book at this point, but that hasn't happened yet.

The old book, however,  is now available on Amazon.

I really am trying to lighten up on myself and assure same self that I'm allowed to fuck around as much as I want -- not every drawing has to be in the pursuit of work/fame/money. Not every doodle is a new character to license and etc. but it is hard, hard, hard. It's getting easier, but still.

So I've got to haul home a new record player and a case for my new computer. It's probably poor planning that both these giant packages arrived on the same day, but who could predict UPS?

My summer project is building a home theatre PC. It's gotta play all the various Internet videos and downloads, plus Blu-Ray, plus (ideally) replace the TiVo's DVR functions. It's a big ambitious thing, but others have done it and I've taken some serious notes on what they've done and plotted my system accordingly. Still, it was going to be one of those pipe dream projects I always talk about and never get to (for example: building myself a new desktop already), so I sank a pile of money into components for this project to commit me to getting it done already. Software-wise, I've got my laptop running almost everything I intend to put on this new computer, but it's a laptop and so it's counter-functional to make it a completely immobile part of the entertainment center.

Yesterday was my first full set (8) of 60-second interval runs without any knee pain. These are tiny intervals for a tiny total, but it's a little victory as I do little physical therapy type exercises and ice and ibuprofen and foam roll the shit out of my legs several times a day. Last week, when I could do only 4 60-second interval bits before stopping, in one of them I hit this, like, perfect form. It was the physical equivalent of an epiphany. Just: BING! and my body ran effortlessly, feet falling in a line, arms not too high, landing on the balls of my feet rather than the heel. I felt like a goddamn gazelle and it felt more like playing out than working out. For just 60 seconds. I think that one single minute redoubled my enthusiasm and determination.

As for everything else, we're still putting the house back together. Cleaning, organizing, exercizing.There's food in the fridge and we threw out everything in the freezer. We're rehabilitating that thing, too. You can already use it to get actual human ice instead of novelty-large or novelty-small cubes. It looks like a doctor's office in that cold cubby, rather than a series of frosty lumps.

Apologies for unexplained absence. I was in Hawaii for Day Job for a while, but I'm back now.

I have a digital camera again after nearly a year without one. Expect photos.

No drawings today, just more posting to keep up momentum.

Friday morning, my brother and I flew out to New Mexico to surprise our mom for Mother's Day. It was a great trip, sort of a mini-vacation with my mom and brother. The traveling and altitude only aggravated my general level of insomnia, though, and finally finally finally I got a deep long night's sleep last night. I was out before the reading lamp in the bedroom was off and while Sara was still playing Mother 3 in the living room. I was so out my dreams were solid objects etched in my memory instead of fuzzy half-remembered notions. I'm saying I feel pretty great today.

Something else that happened was I banged the shit out of my bad knee on a doorway of my mom's new place. Monday was the two-week running furlough mark, but I've got a nice goose egg on my kneecap, so who knows if that joint's feeling better yet or not.

My routine's been jostled and it'll be jostled again next week when I'm gone to Hawaii for work. It's silly, but I'm always a little on edge when there's too much breaking of my routines at once. I've been a relatively slackful and disorganized person in my life, but the creative habits and routines I've slowly put together have made me a healthier and happier person. Even just a few days accommodating chaos, and I get anxious like I'll have kicked my good habits without looking.

We saw a free IMAX screening of the new Star Trek movie last night. It was not at all terrible, which was a nice feeling, given that I went in prepared to wince and watch the whole thing between my fingers while weeping. Most of the stupendously hokey stuff is weighted toward the beginning and it might be the first time where they advertised a movie with all the worst scenes instead of any of the best. It manages to make the danger the characters are in exciting even though you know they're all invulnerable by force of tradition. Given how it shuffles them from cliffhanger to cliffhanger with a big "gee whiz" grin on Kirk the whole time, it actually kind of felt like one of those good Indiana Jones movies.

Maybe I saw charm that wasn't there because of the IMAX experience, but I went in wincing and walked out happy and that hasn't happened since Iron Man last summer.

Today I'm mostly posting to keep up momentum. How are all of you?

I don't know yet how soon it'll be, but there's more to come. That all just wraps up the 30 pages in 36-ish days for a little print mini-comic. Now to aimlessly doodle for a couple days while I finalize some summer comics plans.

You can read all of Radical Boy Portable GT on one page over at Webcomicsnation.

Last May, I started Fail Faster Forever. It's a 500-page graphic novel drawn direct to ink and completely improvised over the course of that summer. As of earlier this week, you can now read the entire thing online for free at Webcomicsnation. Because of how it's made, sometimes it looks and reads like garbage and sometimes it looks and reads like this:

and my heart becomes a goddamn bullet of joy.

This is the time of year where I burst with restless energy. Let's see what happens next.
Collapse